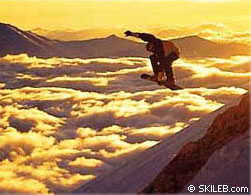 Snowboarding's history shows many influences, such as surfing, skateboarding, snurfing, and skiing. It's roots may even be traced back to the early 1920's. Then children built what would now be considered makeshift snowboards out of barrel staves and rode them sideways down a snowy hill. That was the beginning.

The sport was further developed in the US the 1960's by Sherman Poppin; and later in the 70's and 80's by Jake Burton Carpenter. Today snowboarding is one of the fastest, if not the fastest, growing sport in the world.

The sport of snowboarding has succeeded in attracting a large share of the winter resort population starting with the younger generation. More and more young persons discover the pleasure of snow through snowboarding. This trend is general and Lebanon is no exception. On the contrary, the fever of snowboarding has got up very well. From a mere 10 snowboarders in 1991, we can count more or less 3,000 snowboarders in 1998. And this number keeps on growing steadily. Snowboarders’ daily attendance at Lebanese winter-resorts ranges from 30% to 60%. There are many reasons behind these numbers. Snowboarding is a very easy sport to learn and someone can quickly discover the joys of gliding. 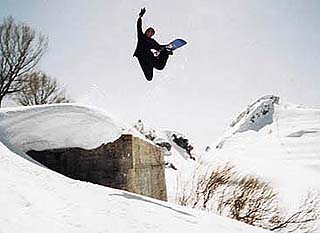 Moreover, the sensation one gets are addictive and simply indescribable. Living in an age everything moves swiftly, all the younger generation has found in snowboarding a perfect escape and a way to express themselves. But that's not all, the Lebanese mountains are well adapted to the practice of this sport. As we do not enjoy extreme vertical drops even though the highest peak reaches 3,083 meters (Qornet El Saouda), snowboarders use as much as possible the terrain they have at their disposal. Cliffs, corniche, gaps, great lines are the common denominators of the terrain. The way a snowboard reacts, the curves that are followed, all these factors make a perfect combination with the terrain we enjoy. Besides the six major resorts Lebanon counts, the potential of backcountry snowboarding is huge. 95% of the Lebanese mountains are untouched so that the rides are simply beautiful. Enjoying the mild weather we have in the wintertime, Lebanon can become a great destination for snowboarders around the world.