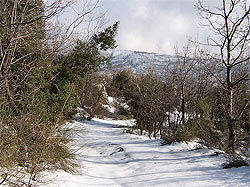 Kfardebian, the highest village of Kesrwan, is located around Faraya, at altitudes ranging between 600 and 2800 meters. It covers an area of 40 Km2 which makes it one the of the biggest villages in Lebanon. Its population amounts to 12000 inhabitants and it is located at a distance of 44 km from Beirut and 27 km from Jounieh coastal city.
In summer and winter the village is full of activities. Those who live in the coast visit the region to enjoy its moderate climate. Ski lovers can practice ski and snowboarding in Faqra and Ouyoun El-Siman (known also as Faraya Mzaar) resorts. Kfardebian is known for its agricultural products and its honey and is rich in water that spring from two sources: Nebaa el-Laban and Nebaa el-Assal.
We reach Kfardebian by taking the Beirut- Jounieh highway and than we turn to the right after the bridge of Nahr el-Kalb following the road that leads to the Kesrwan mountains where Kfardebian is situated.
History of Kfardebian

The name is of semitic origin and it derives from the Syriac which means "the village of deers". The history of Kfardebiane goes back to an ancient period which remains mysterious until now through shortage of archeological and historical origins. Kferdebiane became in the modern age the center of Al-Jird state during the Moutassarifiya period (1860-1914). In 1900, the first municipality was established and was considered the first one in Kessrwane.
In Wadi Al-Salib we find houses, mills and oil-works that are evidence of the village prosperity and fame. The village of today consists of 3600 houses and 15 churches and convents built between the 16th century and the 20th, two schools and 6 clubs among which we find a dispensary, 2 drugstores, a post office and a police station.