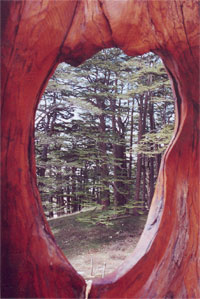 The Cedars forest is 7 km. far from Besharry. It is one of the most important vestiges of the old cedar forests that used to make from the mountains of Lebanon a piece of paradise on earth. Throughout centuries, these cedars had been the dream pf the kings and leaders of history, such as Khufu [Cheops], Nabuchodonosor, King David, and Salomon. This eternal forest is at 1955m. above sea level.

It encompasses 450 cedar trees which tell 4500 years of history. In 1877, the moutassaref Rustum Pasha built the forest famous walls which played a great role in the preservation and survival of the cedars.

The French poet Lamartine visited the forest in 1832, and was inspired by its grandeur and splendor. In commemoration of the visit, the Youth of Besharry hanged, in 1925, a marble stone on a cedar bearing the name of the poet. And in 1996, the Committee of the Cedars Friends in collaboration with the Green Space Agency of the Ile de France, considered the square of Lamartine a tourist site.

Today, the forest witnesses a real care thanks to the committee of the Cedars Friends, that is preserving it and turning it unto an open art museum. On his part, the artist Rudy Rahme, from Besharry, is transforming the dead trees into marvelous sculptures and statues.

Besharry is in the north of Lebanon, located just below the Cedars ski resort. 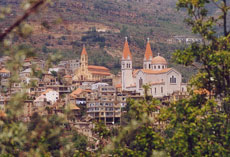 The Besharry region is mountainous, stretching from the far end of Al Koura plain at 250m above sea level. The Qadisha valley lies between its northern and southern slopes. Besharry is endowed with numerous rivers, a deep valley, steep slopes and high peaks which make it unique of its kind. During eras of persecution, Besharry was a refuge for hermits, resulting in an abundance of hermitages on its slopes. The security it offered attracted monks and believers, who built tens of monasteries resting on caves and grottos. Each of the many villages on both edges of the valley has a difficult-to-reach cave, still known as "Al Aassi" [the difficult]. The springs of crystal-clear water, the basin-shaped valleys and some limited plains made Besharry an agricultural region in which grow various kinds of fruit trees.

The wonderful gardens and meadows added beauty to the green nature. Churches, monasteries and hermitages are ancient vestiges surrounding Besharry from all sides. And to the horizon, rises one of the seven crosses that the villagers had set up on the different hills.

Every year, the town celebrates two popular feasts; on the 6th of August, the Transfiguration Day in the neighborhood of the Cedars Forest, and on the 14th of September, the Ascension Day in the neighborhood of the Antique Cross. It aso celebrates, in the middle of August, Gibran's Cultural Week, and the Cedars International Festivals. In addition to all that, Besharry is typical for its handicrafts and traditional cuisine. Besharry is 120km from Beirut, 35km from Tripoli and 7km from the Cedars.

Besharry is the birthplace of Gibran Khalil Gibran. His parents' house is in the heart of the town. Gibran was born in January 6, 1883 in Besharry. He emigrated with his family to America in 1895, then he returned to Lebanon in 1898 to resume his study of the Arabic Language at Al Hekme school in Beirut. He used to spend the summer with his father in Besharry.

In 1902, he traveled back to Boston, where his sister Sultana and his brother Boutros died of tuberculosis. Then his mother died of cancer. In 1908, he went to Paris, supported by Mary Haskel, in order to pursue his study of art. In Paris, he met prominent figures such as Rodin. In 1910, he visited London for a month where he discovered the treasures of the British art, became acquainted with the milieu of Watson, Blake, and Shakespeare. He went back to Boston by the end of 1910. In 1911, he moved to New York in which he stayed until his death in April 10, 1931.

In the 22nd of August 1931, his body arrived to Besharry, where it rests today in the monastery of Saint Sarkis adjoining his museum. In 1933, the youth of Besharry, Mary Haskel, and the Lebanese in Boston were able to fulfill Gibran's will by bringing his paintings and drawings to his town Besharry. Today, his artistic treasures are exhibited in the museum carrying his name in Besharry.

Gibran has sixteen books written in Arabic and in English. His masterpiece, The Prophet has been translated into more than thirty languages. The spread of his message in the world is an essential factor in attracting tourists to Lebanon, and consequently to Besharry. The museum in which Gibran's artistic work and legacy are exposed, as well as his tomb, are situated in the 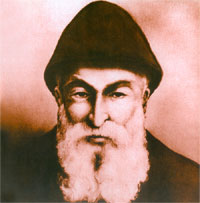 forest of Saint Sarkis. To the east, the old oak wood is bordered by ancient monasteries and hermitages stretching along a chain of rocky cliffs. Among these priories, we distinguish the hermitage of Lebanon where lies a Phoenician tomb dating back to the 7th century B.C., the grotto of Saint Lourd, the monastery of Saint Nohra...

Bekaa Kafra is the highest village in Lebanon (1560m), lying about 5km from Besharry. It is the birthplace of Saint Charbel [1828-1898]. The miracles he worked outdid those of other Saints. Pope PiusVI proclaimed him Blessed in December 1965, then Saint in November 1977. In Bekaa Kafra, the oldest church is that of Saint Houshab, while the largest one is the church of Saint Joseph. The village of Bekaa Kafra, with the cooperation of the European Group, was recognized as a typical village in the heritage of the Middle East Cities' Memory. 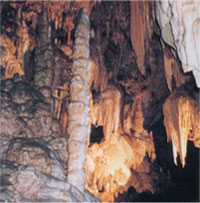 At 5km from Besharry, we reach one of the most wonderful natural underground features in Lebanon: the Qadisha Grotto that was discovered in 1903. Then, with the onset of the Qadisha electric project, the first exploration was made in 1923. Up till today, speleologists have surveyed 778m of this cave whose halls look like forests of stalactites and stalagmites in a myriad of colors. Many authorities and experts began to set studies in order to explore additional parts of the cave which is more than ten million years old, improve it, and update its transportation lines.

Not all ski holidays provide the opportunity to visit such diverse tourism sites, revealing the history and charm of ski areas.