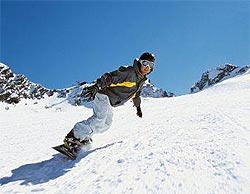 What Bill Gates did for personal computer software, Jake Burton Carpenter did for snow sports. Both transformed their avocations into their vocations and revolutionized an industry in the process. Inspired by the freedom and fun of surfboarding and skateboarding, Carpenter wanted to carve on snow. He reasoned that one wide board with two edges would work better than two narrow boards with four and sold the first snowboard in 1977.

For most people, the first couple of days of snowboarding are more difficult than than the first few days of skiing, but riding gets easier really quickly. The initial difficulties tend to come from exhaustion as much as anything else. When you're not actually riding on your board, you're either sitting or kneeling in the snow, which means you have to get up, which is tiring. Balancing on a board can be tricky, especially at a beginner's slower speeds, and getting the hang of completing turning two very different turns throws most of us for a loop. But once you get the feel of the board and its edges, advancing from green to blue and even to black is easier for most people than skiing.