In 1965 Sherman Poppen bonded together two skis, fastened a rope to one end and sent his daughter 'snurfing' down a snow covered slope in Michigan, USA. This crude construction, labelled a 'snurfer', paved the way over the next ten years or so for the development of what we know today as the snowboard. It took a little longer for the trend to reach the slopes of Mzaar ski resort (previously known as Faraya ski resort) in Lebanon, but it did eventually. Snowboarding in Lebanon started to take off in the early 1990s, and the numbers have been growing steadily.

Over its relatively short history, snowboarding has splintered into several different styles, each requiring its own specialist equipment and technique. 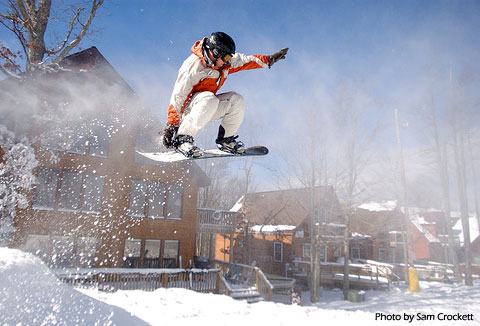 A number of resorts now cater to this type of riding with man-made slope areas packed with quarter-pipes, half-pipes, super pipes, rails, ramps, boxes and all manner of creations that allow snowboarders to exercise their creativity. In its freestyle form snowboarding clearly has some strong similarities with skateboarding--It's all about the tricks and stunts.

A soft boot is commonly worn, that can flexes easily. A large range of movement is required to effectively perform tricks, and similarly the boards used have added flexibility to deal with the rigours of this style of riding.

When snowboarding entered the winter olympics in 1998 there were two events, a freestyle and a freecarve event. The giant slalom was the freecarve event, and took a similar form to the skiing event of the same name. Freecarve riders cut powerful and graceful curves through the snow whilst maintaining high speeds.

A hard boot is mounted on a more rigid board. The bindings are more akin to ski bindings and secure the foot by clipping in the toe and heel of the boot.

The most common form of snowboarding is freeride, and includes elements of both freecarving and freestyle. Most beginners fall into this category and will be kitted out with the appropriate equipment.

A soft boot is often worn and the board is often longer, narrower and less flexible than a freestyle board, the bindings are commonly the same though.

These three snowboarding styles form the basis for a variety of different international competitions that are now held for snowboarding.