Learning to snowboard is painful. Plan to spend a great deal of time sitting down, getting up, sitting down, getting up. Hopefully you have somewhere nice to stay and relax like some of the hotels in the Cedars. Brushing up on a few of the basics: how to carry your snowboard; how to strap-in, how deal with flat areas, can sometimes make your first day on the slopes less of an ordeal. 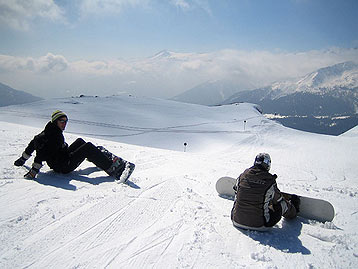 How to carry a snowboard
Snowboards are generally carried one of two ways: under one arm, or across the small of the back with both arms securing it from behind and hands holding onto the lower edge.

The first method is most common and safest in a crowded area. The second method is best suited to facilitate carrying a snowboard uphill when lifts are not being used.

Strapping on a snowboard
Ski boots fasten to skis at the toe and heel through a binding system that allows for quick release during a fall; snowboards do not have this quick release feature and remain attached to the rider. New riders should practice strapping in on flat ground, from a sitting position. The easiest method is to fix you front foot first.

Of the two straps (one for the ankle, one for the toes) it is best to start with the one that secures the ankle. Be sure that the leash (if your board has one) remains attached to the appropriate leg before setting off. Strapping into the board whilst on a slope can be extremely difficult for a beginner and is not recommended.

Switching edges on a snowboard
Switching edges of the board is often done whilst in motion, by turning, but the beginner will need to make the change from a seated position until the required skills and confidence develop.

Sit facing down the slope and roll onto your back, raising the board above your hips. Tip one end towards the ground and rotate your upper body to help the opposite end rotate, bringing the new edge down to meet the slope.

Switching onto the heel edge when facing the slope is a similar procedure that begins with rolling onto your side to rotate the board.

Learning to skate on snowboard
Skating with a snowboard is one of the more difficult skills to master, but also one of the most necessary to learn quickly. An inability to skate will mean full removal of your board each time you reach the end of a run and have to get to the lift queue. Anything other than a chairlift, like those at Cedars ski resort, will also require this skill.

The front foot remains attached to the board and the rear foot is unstrapped for stability and propulsion. The method for skating is akin to how a skateboard is ridden--pushing of the ground until enough speed is acquired to coast freely, at which point the rear foot is placed on the board between the empty binding and the front foot. Steering and balance are both difficult to negotiate in this position, particularly for the beginner.

New snowboarders will find that skills are quickly acquired once the basics have been mastered. With only two edges to consider and a single board to distribute your weight on the art of snowboarding is much less complex than skiing.