How to Carve your Skis

In order to make shorter turns, and thus control speed better on conventional skis, the skier must pressure the ski, which causes it to bend. This bending of the ski causes the edge to form a deeper arc in the snow, causing a shorter radius turn. In addition, steering the feet throughout the radius of the turn can shorten the radius of the turn and aid in speed control.

Unfortunately, many beginners and intermediate (and even a lot of advanced) skiers either do not have the strength, confidence, or technical ability to generate more pressure (using angulation and centrifugal force) or foot steering to make true, carved short turns. As a result, the skis skid throughout the turn, and thus, instead of the skis being used as turning instruments (as they were intended), the skis are used as braking instruments.

Parabolic skis have a much deeper side cut than conventional skis. That means that there is a much greater difference in the width of the ski at the tip and the tail than at the waist (the part directly under your foot). They are pretty easy to spot on the mountain, due to the large tip and tail, and the hourglass type shape. In fact, many refer to these skis as hourglass skis. 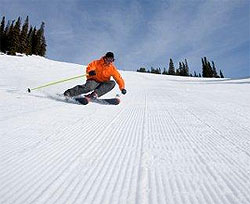 As a result of the deeper side cut, much less pressure and foot steering is needed to make a pure carved turn. In fact, on easier terrain, all you need to do is tip these skis on their edges, and they turn pretty quickly. Thus, smooth, carved, shorter radius turns can be achieved at a much lower rate of decent down the mountain, which makes a lot of people very happy; it might even let you touch the snow!

It is highly recommend getting yourself a demo pair of parabolic skis, even if you are not thinking of buying skis, just to see what they are like. After a first day on parabolic skis, your skiing will get better, and what you learned on these skis will be translated back to your conventional skis. In other words, you will get better, permanently, as a result of just one day on these skis.

As for the downsides to the parabolic skis ...
If you were just going to ski bumps all day, you probably would not pick the parabolics. First of all, the swing weight is a little higher than that of many conventional skis. Secondly, the larger tip seems to enhance the deflection effect when hitting a bump, so that it feels as if the skis push you around a little more than usual. But perhaps the toughest thing about using these skis in bumps is that the skis want to grab, carve, and track horizontally, which is not very useful in bumps. They don't really want to pivot and skid, which turns out to be much more useful when skiing bumps.